Living at Mercy makes us realize there are people who can help and there are similar kids who’ve been through things like us. Every one of us has our own amazing story. Let’s share them. It opens our eyes to other perspectives.

No other Mercy Home for Boys & Girls event is as rich in personal testimonials our Graduates’ Luncheon, hosted by the Leader Council. The 16th edition of the annual fundraiser for education bore witness to several young people’s moving and inspirational stories, and through them, demonstrated how your loving support creates positive change in the lives of kids.

As always, the luncheon is also Mercy Home’s opportunity to celebrate all of our graduates from area schools and academic programs. After the opening processional, in which all 42 graduates took the stage under an ovation from more than 800 guests and coworkers, graduate Darius told the audience how he has worked to overcome shyness and isolation and has gotten more active in the life of the Home. Just standing at the podium in front of the crowd gathered in the Hilton Hotel’s Grand Ballroom to introduce Fr. Scott Donahue was itself a moment of personal growth and triumph. Darius also drew applause after saying that he has started his studies at Loyola University and adding “Go Ramblers!” Loyola’s men’s basketball team was the toast of the town earlier this spring during the NCAA Final Four.

But what Darius didn’t know when he ascended the stage was the surprise that Mercy Home President and CEO Fr. Scott Donahue had in store. After explaining that Mercy Home awards a yearly scholarship in honor of Leader Council founder Mary Dempsey, Fr. Scott turned to Darius and announced that he was this year’s recipient. Fr. Scott then honored the work of the Leader Council, whose members have worked to empower youth through education and continue to go to ever greater lengths to prepare our young people for lifetimes of self-reliance and success.

Fr. Scott acknowledged the leadership of each of the Council’s chairs during its 17-year-existence, Mary Dempsey, Karen Parkhill, Sue Bettman, Eileen Mitchell, and finally our current chair, Nancy Temple. Fr. Scott announced that Temple was coming to the end of her term as Council chair and headed to our Board of Regents this summer.

The full program opened with a video about Community Care member Zeni, after which our emcee and Regents member Jim Williams announced that she was receiving a substantial scholarship from the University of Chicago’s graduate school of social service. Zeni then thanked the crowd for giving her the support she needed to achieve so much in her life and said she intended to give back and help struggling families. Afterward, with a little help from the AV staff at the Hilton, Zeni introduced the luncheon’s keynote speaker, Exelon Senior Vice President and CEO Anne Pramaggiore. Striking a mock warning tone, Zeni sternly advised the audience to pay close attention to the energy company leader before the house lights flickered off and on.

But no threats of power interruptions were needed, as Pramaggiore delivered a captivating and inspirational commencement speech to our graduates. After congratulating the graduates on their accomplishments, she offered what she said was simple advice centered on the theme of connectedness with others, noting that it’s the key to success, to a life well lived, and the essence of humanity.

“Connecting with others is your gift to the world,” Pramaggiore told the graduates, adding that real connectedness was about sharing, supporting, and giving.

Mercy Home’s Board of Regents member Eileen Mitchell then took the stage to represent the luncheon’s presenting supporter, AT&T. In her remarks, she likened the belief that AT&T’s employees have in Mercy Home’s young people with their belief in Chicago in describing the company’s commitment to improving lives here. She announced that AT&T was expanding its commitment to Mercy Home by participating in our Friends First volunteer mentoring program and she appealed to the audience to consider mentoring with Mercy Home as well.

Eighth grade graduate Asia then introduced our keynote youth speaker Angelika who recently graduated from St. Francis De Sales High School and will begin working toward a degree in psychology from Eastern Illinois University in the fall.

Angelika’s personal story of struggle growing up in Poland before encountering challenges the United States riveted the audience. At one point, she said, she found strength in books, including one in which she learned about Athena the Greek goddess of wisdom. “Looking around the room today,” she said, “at all the women who are empowering lives — like our own Leader Council — it’s easy to see why the Greeks saw a woman as a figure of wisdom.” Later, at Mercy Home, she found strength and the tools she needed to heal and to build a platform for her future. She credited several caring coworkers for how far she has come, but especially her program manager Monti Clayton. “Well, Monti,” she concluded, “Here I am! Standing tall, up on this platform!  I built it. You showed me how. Everyone at Mercy Home showed me. ”

WGN-TV News Anchor Micah Mattere concluded the event with an impassioned appeal to support our young people’s educations through the paddle raise. WGN-TV was the event’s television supporter and is led by Leader Council member Jennifer Lyons.

To our keynote speaker Anne Prammagiore, all of our sponsors, board members, coworkers, and other guests who helped make this event such a success for our young people, we would conclude with the same words Angelika did during her speech: Dzuękuję bardzo.

View Photos from the Event 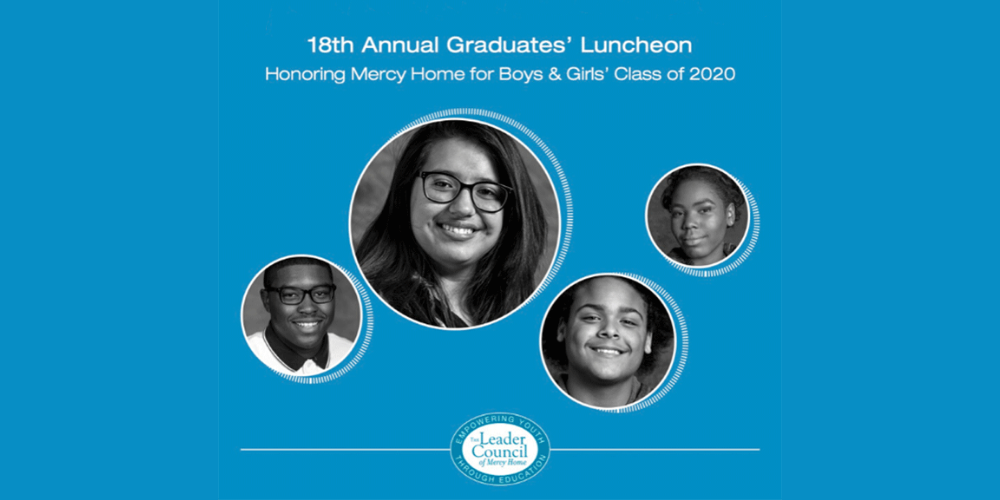 Despite Uncertainty, Mercy Home’s Graduates Look to Future with Determination

The 18th annual Graduates’ Luncheon looked a little different this year, but the purpose of the event remained the same:... 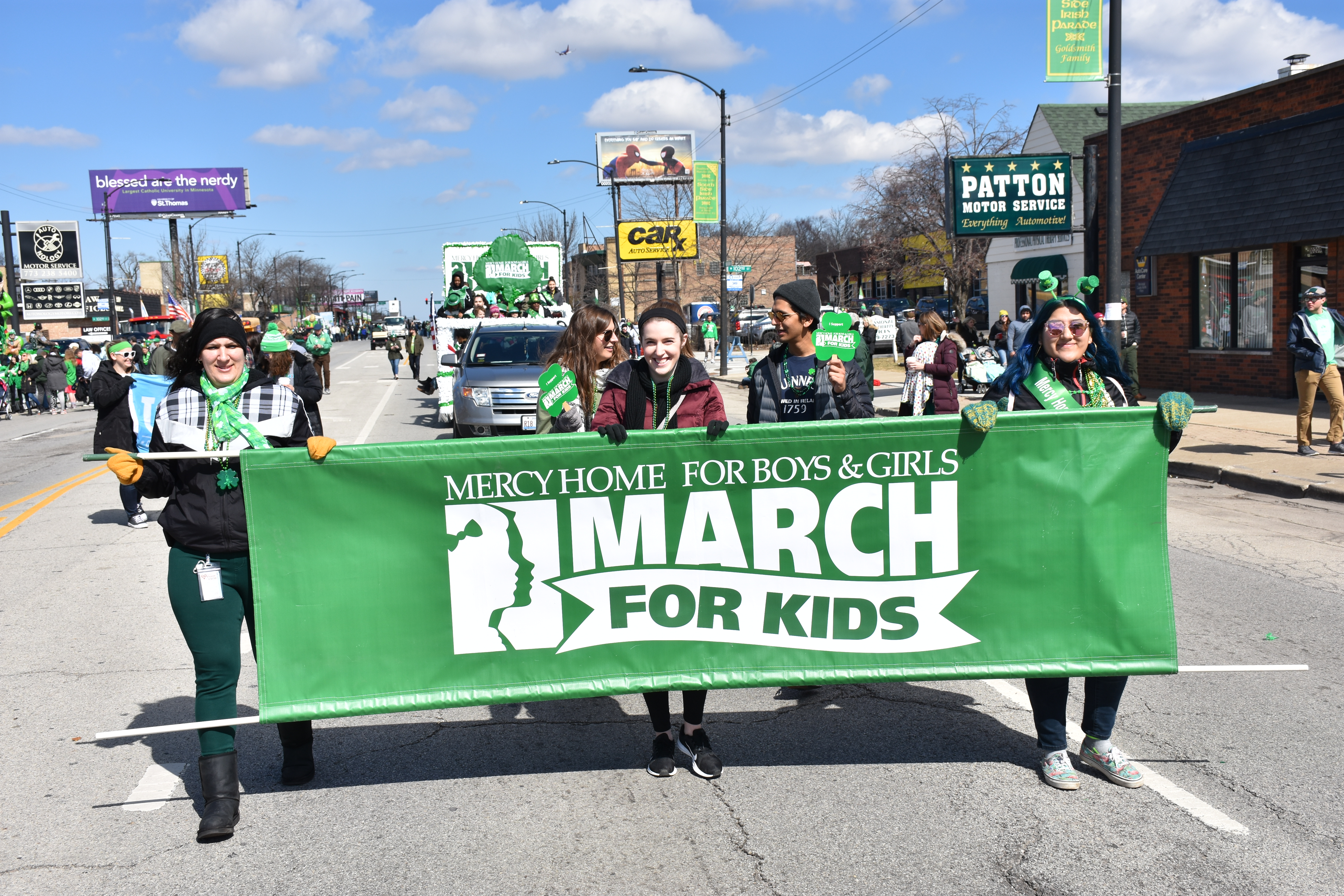 March was an amazing month for Mercy Home. With appearances at both Chicago- area parades and help from our sponsors,... 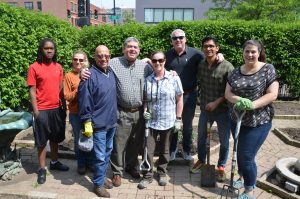 Green Thumbs for a Greener World

Volunteers from AkzoNobel picked up shovels and rakes at our boys campus garden to help kick off the growing season...