There is something special about a bond between friends. When we are having a bad day, they will always be there to extend a hand and do what friends do best–pick us up when we fall.

In the 2018 Bank of America Chicago Marathon, thousands of fans cheered and waved to the runners going by. With only .3 miles left in the race, Maggie Fobare and her two friends were nearly at the finish line. As they turned the corner on Michigan Avenue, Maggie ran past her friend Carlos. When she looked back at him, she noticed something was wrong.

“The day he ran the marathon, he had super bad cramps in his leg,” she said. “I could tell that he was struggling.”

It was always in Maggie’s DNA to be a team player and a leader. Her entire life revolved around playing sports, such as soccer and lacrosse. She learned the art of leadership and the pillars of teamwork as a lacrosse player on the Northwestern University Women’s Lacrosse team from 2012- 2015.

Maggie competed at the highest collegiate level, and for her team to be contenders in the Big 10, they had to be in great shape.

“We had to run a seven-minute mile every week; otherwise, we could not practice,” she said.

After she graduated with her bachelor’s degree in communications, with a minor in business and a certificate in marketing, Maggie began her new career in advertising at Starcom.

But she still needed a reason to push herself to run, and since she no longer had a coach to motivate her, Maggie wanted to find a way to keep running as part of her life.

One day at work, John Sheehy, Global Brand President of Starcom and Mercy Home Board of Regents member, went to her office and asked the staff members if anyone wanted to run a marathon with him. He added that he would sponsor 30 runners.

Maggie was immediately interested and excited to run a marathon with the president of her company.

Eventually, John and Jim Harding, our former Heroes coordinator, invited Maggie to learn more about Mercy Home and to visit its campus in Chicago’s West Loop.

Right away, she fell in love with Mercy Home’s mission. She had always done community service and had tutored a young boy for four years. But because of Covid-19, she was no longer able to tutor and hoped to one day volunteer again. Running a marathon for charity seemed like the perfect way to get involved.

Maggie was on cloud nine after she completed her first marathon in 2018 with the Starcom team. The following year, she took a step further by joining the Associate Board at Mercy Home.

It was a new chapter of her life with Mercy Home, and soon she would meet a new friend and running partner that would need her the most during their next marathon adventure.

“[The] second year [I] ran it was way more inspirational,” Maggie said. “Carlos was a [youth] at Mercy Home and ran the marathon with us.”

Carlos is a former Mercy Home resident and ran for his high school’s cross-country team. Running was his therapeutic outlet and a way to escape stress. He decided to join the Heroes team and was in Maggie’s running group his senior year of high school.

As they got to know each other, they instantly clicked.

“He’s almost like a little brother to me. I’m like a mentor to him,” she said. “We check in and ask how each other is doing.”

Reflecting on their conversations, Maggie could sense how Mercy Home gave Carlos a safe place that cared for his well-being.

“Mercy Home is a safe place, and I could see in the way he acted around it and talked about it,” she said. “Having a place to really call home and that there are people rooting for you and caring for you, is the biggest thing that I noticed it did for Carlos.”

In preparation for the marathon, the team would meet up at the Chicago Riverwalk to train. It was during these training sessions that Maggie introduced her friend Jess, another Hero, to Carlos. Jess had a similar background to Carlos, and they connected over that, creating a great bond.

“[I wanted] to show Carlos you’re not alone here,” she said. “We can all work together and were not as different as everyone might think.”

On marathon day, Maggie, Jess, and Carlos decided to embark on the marathon together. There was only one issue: Carlos was experiencing bad cramps in his legs. But he was not about to give up after everything he endured. So, he decided to push past the pain and run no matter what might happen.

“The entire marathon he was 10 miles ahead of me,” she said. “I saw him at the last stretch.”

Toward the final leg of the race, Maggie and Jess caught up with Carlos. They noticed that he was weary.

Maggie waved at Carlos, and he tiredly waved back. At that moment she was very concerned that he was not OK.

“[I] saw the way he waved [and] that something was not okay,” she said.

Maggie and Jess quickly turned around to check on him. Maggie reached out to him and said, “Come on, Carlos.”

As the crowds chanted along the sidelines, Maggie and Jess encouraged Carlos. They were not about to leave him behind. They were so close to finishing.

“He was carrying me through the entire journey. The least I could do was push him through the finish line,” she said.

From there, the three never left each other’s side.

“We all crossed the finish line together and finished in tears, hugging and so overwhelmed,” she said. We turned to each other, and he said, ‘we did it.’”

This fall, Maggie is motivated to complete the race again even without her running partner Carlos at her side. She is also looking forward to matching her parents’ record of three completed marathons. With the support of the Mercy Home family, we know she will accomplish her goal. Because at Mercy Home, we support our kids and help them up when they fall, just like how Maggie and Jess encouraged Carlos to finish the race. 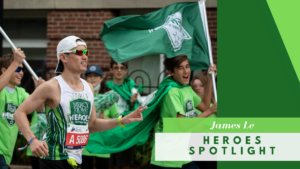 A Hero Finds His Way Home

James Le is a military veteran born and raised in the “city of broad shoulders.” His parents immigrated to Chicago... 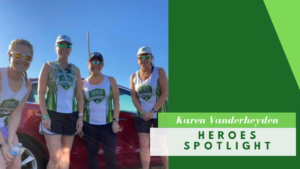 Heroes Cheer On, Lean On One Another

As Karen Vanderheyden ran the trail at Busse Woods in suburban Chicago, she would sometimes let her imagination take her... 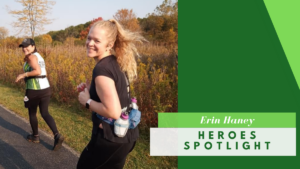