The journey toward 26.2 miles isn’t easy. It requires dedication, persistence and perseverance.  Each Mercy Home Hero has their own reason for taking it on. For Emily Vaupel, it isn’t just her passion for running – it’s the mission of Mercy Home for Boys & Girls – a mission she understands quite well.

Vaupel has worked in youth residential care herself, and not only has she run three marathons for our kids, she’s also volunteered in our community mentoring program. When she’s struggling to push through a long training run or make it up a steep hill, she reflects on the memory of her Mercy Home mentee, Janiya, to keep going.

Running on a mission

Vaupel’s love of running began as a teenager. She ran cross country and track at York High School, a school known for its running program and featured in the 2005 documentary The Long Green Line.

When she attended nearby Elmhurst University, she drifted from the sport. Instead, she focused on her studies and pursuit of a psychology degree. It’s here where she first connected with Mercy Home.

While most college students scrape together $20 for pizza or to go out with friends, Vaupel decided she would take that money and become a monthly donor to Mercy Home.

“I couldn’t participate in the mission in the sense that I was in college and I didn’t have that kind of time to maybe volunteer,” Vaupel said. “But I wanted to somehow make a difference.”

After college, Vaupel headed west to San Diego, where she spent nearly a decade working with severely emotionally disturbed children in residential care. She eventually moved back to Chicago and started getting back into the swing of running.

As her mileage increased, she figured she’d try a marathon. Given her ties to our mission, Mercy Home was a perfect fit, and in 2016 she joined the Heroes team for the first time.

On marathon morning, while standing in one of the corrals waiting for the race to start, she spotted a fellow Hero in the sea of runners. It just happened to be the niece of Mercy Home President and CEO Fr. Scott Donahue. She also spotted a childhood friend, and the three ran the race together.

As they approached the Mercy Mile with just under 10 miles remaining, Vaupel and Fr. Scott’s niece both started to feel the enormity of the moment. When they passed Mercy Home, they were flooded with emotion, smiling and crying as they pushed toward the final third of their journey.

After crossing the finish line, Vaupel knew it was this support that carried her through.

“The challenge you have in running that first time – to know that you did it – it didn’t feel that heavy,” she said. “And I guess it was because I knew that Mercy Home was behind me.”

When Vaupel returned to Chicago from San Diego, she was no longer working in residential treatment. She missed being around kids and making a positive impact for them, so she decided to volunteer in Mercy Home’s community mentoring program.

When she met her 13-year-old mentee for the first time, she knew it was a good match.

“Janiya was one of those kids who was somewhat reserved, but you could just tell when she smiled, her eyes lit up and it just brightened up a room,” Vaupel said.

It was Janiya’s reserved nature that prompted Jamila Spencer to sign her daughter up for the mentoring program.

“Janiya was a sweet, sensitive girl. She kept stuff inside, so that was one of the reasons I had her join the mentor program,” Spencer said. “I just wanted her to be more outspoken and stick up for herself when she had problems instead of just holding stuff in.”

Vaupel and Janiya enjoyed many activities together. Janiya loved animals, and during their visit to a local forest preserve she saw her first deer. Vaupel also took Janiya to her first sporting event – a Cubs game at Wrigley Field. They went for walks, out to lunch and on visits to Starbucks. They also talked on the phone and exchanged text messages.

“Janiya was opening up more,” Spencer said. “I was starting to see a change in her, which I liked, and she liked too.”

At school, Janiya became a mentor herself, helping younger children when they needed it. With such a caring spirit, it is no surprise that her goal was to become a registered nurse.

Yet just as she was starting to find herself and discover her talents, her life was cut tragically short.

Janiya had an undiagnosed heart condition, and while getting ready for school one day, she had a heart attack. Though paramedics were able to bring her heart rate back up, she went without oxygen for too long, and she passed away.

In the year they spent together, Janiya made just as big of an impact on Vaupel’s life as she was hoping to make for her mentee. Janiya taught Vaupel how to slow down and enjoy the simple things adults often take for granted.

When Vaupel attended the memorial held at Janiya’s school, she was touched to receive something very special from Spencer.

“She gave me the biggest gift in the world, in the worst situation,” Vaupel said. “She had lost her precious daughter, and she took the time out to give me the gift that I had made an impact – and that meant the world to me.”

She had lost her precious daughter, and she took the time out to give me the gift that I had made an impact – and that meant the world to me.

And for Spencer, that Vaupel continues to remember Janiya and run in her honor means the world to her also.

“It makes me feel good as a mother. I think one of the hardest things is when you lose a child, and they’re so young… A lot of people don’t know how you feel, don’t know that she’s constantly on your mind,” Spencer said. “So just to have someone else remember her and to think about her – it feels good. It just feels really good.”

Janiya’s caring spirit still lives on to this day. Though she was never able to become a registered nurse, she fulfilled her dream of saving lives as an organ donor.

Given Vaupel’s years of experience running and working with kids, coaching was a natural fit. While coaching cross country and track at a local high school, she once again connected with a Mercy Home youth.

Vaupel instantly recognized one particular young man on her team as a natural leader. Though he was a strong runner, he took the time to slow down and run alongside a girl on the team with Down syndrome to keep her motivated.

The young man knew Vaupel ran for Mercy Home and had worked in residential treatment in the past, so he was comfortable confiding in her.

He told her about his past struggles that led him to Mercy Home and the challenges he was experiencing as he adjusted to our Home. But as time went on, Vaupel saw things come together for the young man as he successfully graduated and went on to college.

“He had a lot of strong character strengths, but I think Mercy Home really helped him put it all together,” she said.

He had a lot of strong character strengths, but I think Mercy Home really helped him put it all together.

Recently, Vaupel made the transition to coaching at the college level at Loyola University Chicago. Now, she’s taking her passion even further by going back for her master’s degree in kinesiology.

“I am very passionate about the impact of exercise – specifically running, obviously, because that’s a passion of mine,” she said. “How that can help people at-risk – meaning, say, individuals with diabetes, individuals with heart conditions.”

Vaupel is also interested in how exercise can help improve mental health for others. In stressful times in her own life, she has found running to be a powerful outlet. And any time the marathon training gets tough, she slows down and thinks about Janiya and remembers why she is doing it.

“I’m always inspired by her to think – it’s for kids like Janiya that I run.”

Learn More About Our Heroes Program

Though the 2020 Bank of America Chicago Marathon has been canceled, Will Smith remains committed to running and being a... 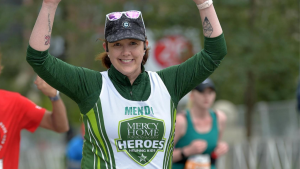 When Mendy Springer joined the Mercy Home Heroes team, she found the community she had been looking for after moving...