“If other people can run a marathon, why can’t I?”

That was the question that Erin Haney asked herself before signing up to run her first 26.2 miles last year. Always an athletic and outdoorsy person, Erin was a competitive swimmer growing up and had run some 5Ks and a half marathon before.

“I was so pumped up after that race,” she said. “And I was like, if I can do a half, why couldn’t I run a marathon? If other people can do it, I can train for it and do it.”

When signing up to run in 2020, Erin knew that she wanted to run the marathon to support a charity. She heard about Mercy Home through her work as a special education teacher with Chicago Public Schools, and when a coworker at her school recommended the experience as a former Mercy Home Hero, Erin decided to sign up with us.

Originally, Erin planned to be a “one and done” marathoner, but when the Bank of America Chicago Marathon was canceled last year, her plans changed. Because she fundraised and trained, she decided to be one of our Heroes who committed to “26.2 no matter what” and ran a full marathon at Busse Woods in the Chicago suburbs.

“It was a great experience, but I have to run [the marathon] in Chicago [now],” she said.

With this year’s marathon still on, Erin is looking forward to experiencing the full Hero experience, including taking advantage of our Hero HQ and running past the Mercy Mile.

“I’m very much looking forward to marathon day,” she said. “I hear it’s an amazing experience.”

Erin has also likely changed her mind about hanging up her running shoes after this year’s marathon, in great part due to the friendships she has made as a Hero.

“Why I think I’ll keep doing it year after year is because of the camaraderie,” she explained. “It’s not just the training plan, but [also] the support.”

Erin met a lot of her running buddies through the CARA training program. She runs with them at the lakefront on Sunday mornings and has enjoyed the chats they have during their training sessions.

“There’s just such a great group that I look forward to chatting with through our long runs,” she said. “We have a text group, and we text throughout the week. It’s just been an awesome experience.”

She has also connected with other Heroes on the Facebook group, and they have gone to events together and met at other runs.

“[It’s great to] make friends with like-minded people who also have a healthy lifestyle and have the same goals,” she said. “And Jim [Harding, the Heroes’ coordinator] does such a great job of planning so many different events so we can all come together and meet up and run. There’s always stuff going on that keeps people connected.”

Both the runs and social connections provide a great outlet for Erin, a single mother of three children with disabilities, to have some “me time.” She also has enjoyed bringing her children to events so they can meet the many friends she’s made while running with Mercy Home. These friends have also provided her with surprising connections related to her children.  She learned about adaptive camping from one friend who works for the forest preserve and met another woman who works as a neonatologist at the hospital where her children were born.

“It’s such a small world within such a huge city, and those connections were all made between Mercy Home and CARA,” Erin said.

These friends have especially made a difference in Erin’s training for this year’s marathon. She trained alone last year but ran her first marathon with two Heroes and immediately loved the idea of running with others. This year’s training with others has made a tremendous difference, and her Sunday runs haven’t disappointed.

“Being able to run with a group a lot and see the skyline and the city, it’s just awesome,” she said. “There’s never a Sunday that I leave a long run and don’t feel super pumped up and just happy.”

Erin has also enjoyed running in various cities when she’s traveling and encourages her fellow Heroes to use this strategy in their own training.

“I feel like you get such a pulse for the city when you’re running through the streets and neighborhoods,” she said. “You get to experience it on a different level than you would driving around in a car or during touristy things.”

And now that Erin is a committed marathoner, she doesn’t see herself ever running for anyone other than Mercy Home.

“I don’t know if I could ever run for anybody else after Mercy,” she said. “And a lot of that is just my personal connection to Mercy Home [and] seeing how loving things seem to be there [for the children].” 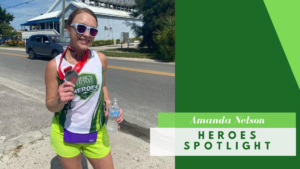 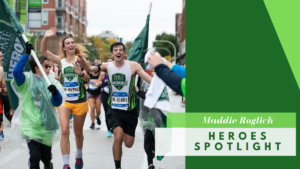 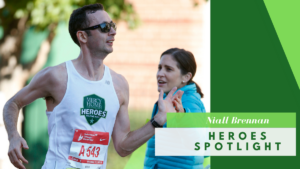