>>I have a beautiful, true story that reminds us of how we all give witness to the risen Lord. In the way that we care for and love one another.

It’s the story about a woman whose name is Lucy and she lost her purse. Now, this wasn’t just any old purse. It was the purse that her mother had given her a year before her mother died. It was the last Christmas present she received.

One day on her way home from work, her mind distracted with all the things that she had waiting for her at home, she got off the bus and she left the purse behind. And she was very sad and hysterical over the fact that she had left her purse on the bus.

Now she was certain the purse was gone – with her wallet and her credit cards, her glasses, and all the other things that she kept in her purse. She was frantic knowing it would take time and money to replace all those things, but the most sad part of losing her purse was the memory of her mother.

It was that special gift that her mother had given to her. She was sad at the memory of the purse and the smell of the fine leather, the wonderful stitching in the purse, and her initial l that had been engraved in the leather. And she was upset because of losing that special memory of her mom.

Now she was at home and tears still welling up in her eyes as she thought about leaving the purse on the bus, the doorbell rings. She went to the door, she opened the door, and on the other side was a woman in a grey uniform very familiar. And she handed lucy the purse.

It was the bus driver. And the bus driver explained how a passenger had returned the purse. The bus driver got all of lucy’s information from inside and even though she was exhausted, on her way home from work she made the decision to drop that purse off to lucy.

Lucy was a stranger. She had no idea who lucy really was, but she made that conscious decision to be caring and loving and to bring that purse back to lucy.

The bus driver in the story reminds us that we continue the memory of the risen Lord in our care and our love for one another. 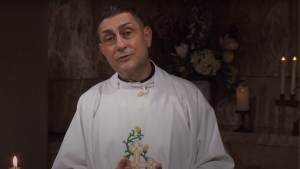 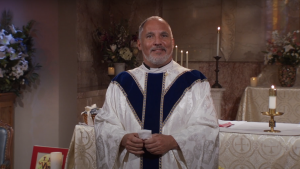 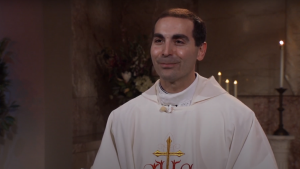