Recently, a group of Mercy Home’s young people enjoyed a unique STEM experience by touring the Argonne National Laboratory in Lemont, Ill. A good friend of the Home, Pat Brutto, coordinated the visit and accompanied the group on the tour. Dr. Dave Hooper, a biochemist with Argonne, served as tour guide and shared his knowledge and enthusiasm for the incredible research being conducted and the amazing outcomes achieved there.

A Brief History of Argonne: From Stagg Field to Lemont

Dr. Hooper recounted Argonne’s history and how it stemmed from a world-changing scientific event on a squash court beneath Stagg Field on the University of Chicago’s campus. It was there, on December 2, 1942, that the world’s first self-sustaining nuclear chain reaction took place, ushering in the Nuclear Age.

At first, the top-secret development of the reactor, led by Italian physicist Enrico Fermi, produced just enough energy to power a small light bulb–yet it ultimately changed world history. The experiment, nicknamed CP-1, was the critical first step in the success of the Manhattan Project, the race by the Allies to develop the atomic bomb before the Nazis during World War II. The visit occurred close to the 80th anniversary of that momentous occasion.

According to Argonne’s web site, “CP-1’s success spelled the end of a world war for one generation and inspired formation of a national laboratory system that has benefited every generation since.”

The remains of the reactor are buried nearby in the Cook County Forest Preserves.

The Argonne National Laboratory, established by the U.S. Department of Energy in 1946, was the first of 16 labs that formed a network of research and development. While focused initially on nuclear energy, these centers have impacted numerous other areas of science as well.

Later, Dr. Hooper spoke of the many projects and research taking place at Argonne, including advanced computing, discovery science, energy research & development, and global security. In addition, Argonne was instrumental in the development of the COVID-19 vaccine, and they are currently hard at work solving environmental issues.

Envisioning a Future in Science

After the tour, the group enjoyed a delicious lunch in the cafeteria and had an opportunity to discuss the variety of internships and mentorships available to the young people interested in science. Our kids were inspired by the wall hanging in the cafeteria, which read “We Start With Yes,” sending the message that anything is possible at Argonne.

The visit was a great science learning experience for our kids and we are deeply grateful to Pat Brutto and Dr. Hooper for their hospitality. 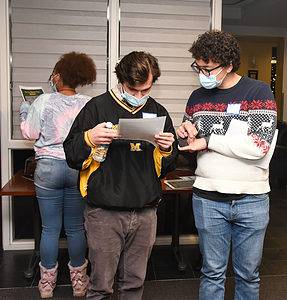 In January, our bright and talented Mercy Home Scholars enjoyed a delicious dinner to celebrate their end-of-semester accomplishments and to... 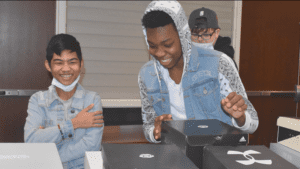 In a wonderful act of kindness, our friends at Swish House and 360 Soles raised $5,000 to give every boy... 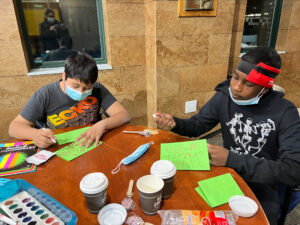 Presenting the 2022 Book of Service

At this year’s 30th annual Mercy Home Tree Lighting, our young people presented the Book of Service to the City...