We have a story of a conversion of Zacchaeus, the tax collector, something we’re all familiar with, the short little man climbs up sycamore tree, sees Jesus and his heart is changed forever. Now in my opinion there are three ways that a person converts. Or three ways that a person becomes a more committed disciple of Jesus Christ. So that is, you know what, we might be Catholic and following our lord, but then something happens to us that our faith goes to the next level. Or someone who’s not even Christian or someone who’s fallen away from the faith is able to come back to Jesus Christ. How does it happen? So the first way is by I would say just sheer miracle of our Lord. So Jesus comes and he impacts the person, think of Saint Paul, when he was Saul, falls of the horse, Jesus literally appeared to him, blinded him, it was a miracle, Saul’s converted to Paul, so that’s the first way. It can happen but maybe that’s not too frequent. The second way a person is converted is that something impacts them. Are they going along their life and they see someone or they see a beautiful experience either out in the city or something in nature or they read something profound or maybe they come to Mass just once and they’re struck by the beautiful music or the homily, who knows, not my homily, but whatever, they’re struck, they’re impacted. And they’re changed because of that moment. That would be like Saint Matthew’s conversion, if you know that scene in the gospel – Levi sitting down on a table with his friends, he’s a tax collector as well and Jesus comes and he calls him. That impact from Jesus, from the experience of seeing our Lord changes him. And then the third way someone is converted is through our prayers. So when we pray for someone we can change them, that’s the power of our prayer. So think about you praying for maybe a grandson or a child that’s fallen away from the faith or someone that’s struggling, your prayers are impactful if you can pray for that person. So how did Zacchaeus convert, which one of those three ways, was it a miracle, was it by the seeing of Jesus from the tree or is it by the prayers of someone else? I bet it was probably all three of those actually. Now the third one is actually something provocative to think about, Zacchaeus was a not well received man he’s a tax collector, in fact he was probably hated. But what if there was just one person in that crowd in Jericho, who prayed for Zacchaeus, just one little prayer went up for that man and guess what, that prayer worked, it changed him, that little man came down and then his heart became huge in stature, he became a committed disciple, he turned away from his wicked ways and I bet he’s a canonized Saint today, Saint Zacchaeus, all because of that one person’s prayer. So whatever it is, friends, however we gotta get someone to come into church, never underestimate the power of your prayers. Never underestimate the impact that you could have by doing something beautiful in the world and by introducing someone to Jesus Christ, you can change their life forever for the good, just like Saint Zacchaeus, Amen.

A special thank you this week to our congregation from Divine Mercy Crusade. 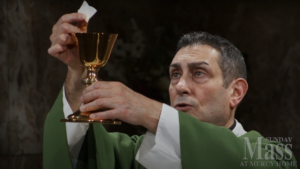 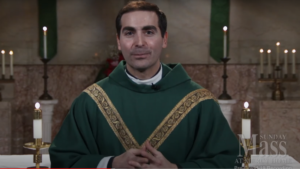 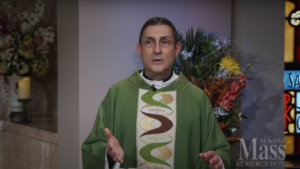