>>This happened in Bethany, across the Jordan, where John was baptizing. The Jordan River. St. Hippolytus called it ‘the grand river.’

In Hebrew, Jordan River means the descender because it connects the sea of galilee in the north with the dead sea in the south. The Jordan river runs between the two. It’s very symbolic of salvation of life. The sea of galilee where Christ did most of his ministry is teeming with life.

If you’ve ever been to the holy land it feels like Florida. There’s palm trees and fish and seagulls and a lot of life. Dates, figs, fruit. But if you go down south to the dead sea, the lowest point of the face of the earth, nothing lives. It’s the highest body, ah, highest salt content- ah, piece of water on the earth. Nothing is living there.

So, as we move south through the Jordan River we enter into death. And John is standing at this threshold between death and life where he’s baptizing. Bringing people into the new covenant, the new testament.

Of course, in the Old Testament the Jordan River was also symbolic. It’s where Moses and the Israelites crossed as they left slavery and Egypt into the promised land. It’s where Naaman the Syrian was baptized by Elijah and Elisha, the prophets. That’s also where Elijah left his successor, Elisha, as he crossed into heaven. Elijah of course did that.

King David, when he’s fleeing from his son Absalom who’s trying to take the thrown and kill his father. David crosses, fleeing, the Jordan River. He fights a desert combat with Absalom and then when he’s victorious he recrosses the Jordan back to Jerusalem, back into victory.

How can you cross the Jordan River on this third Sunday of advent as we approach the Christmas holiday? And let John the Baptist also be a saint who prays for you. An instigator to your salvation.

One thing I love about John the Baptist is he’s not about himself-like the Blessed Mother, who’s another key icon in this advent season- he always points to Jesus Christ.

So, notice in this gospel. He’s asked these questions and he says “no” to each one of them.

Who are you? I’m not the Christ.

Are you Elijah? No.

Are you a prophet? No.

Well, what are you then?

He says: look I’m just a voice crying out in the wilderness. I am just a sign pointing to Jesus Christ.

It’s good for us to be nothing men and nothing women, like John the Baptist. That can be our way of crossing the Jordan River into salvation. By not pointing to ourselves and not trying to say, “look how great I am, or how much I’ve done, or when I failed look how terrible, or how much of a sinner I am.” But always to say, “it’s all about Jesus Christ. I am a reflection of Jesus Christ. I am God’s beloved son or daughter just like John the Baptist.”

So, may we be healed and may we be saved this advent season. God bless you. 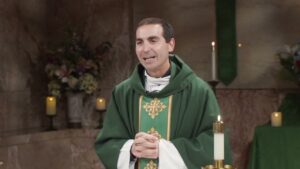 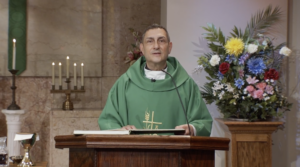 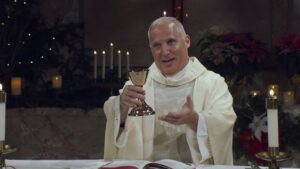