Fr. Wallace: So I’ve mentioned before I did my seminary in Rome at the North American College, now Rome is seven hours ahead of Chicago. I’m also a very big sports fan. I love the Bears. So that means when a Bears game was on at noon in Rome, it came on at seven o’clock at night. And when the Bears played on Sunday night, seven o’clock came on at 2 a.m. in Rome, which meant I watched I got up and watched Bears games at 2 am.

Now the morning mass and the next day was at 6am and I would usually prayed about 4:45, 5am before mass. So getting like three hours of sleep, watching a Bears game and then usually the Bears would lose on Sunday Night Football, they’d get killed by the Packers or whatever. So I’d be in an edgy mood and then like come sign of peace. I’m like not smiling and I’m upset.

Now, it’s foolish. It was foolish of me on several reasons.

One, I was tired. Two, is making me angry before mass. And then like I’m a Chicago priest and then the guys from Wisconsin, the seminarians, I was mean to them afterwards. So this attachment to the Bears was was not good for me.

But I didn’t know that I wasn’t wise. It wasn’t prudent. I thought, I’ve got to watch the bears. This is going to be bring me joy and peace, just the opposite. Now, I’m not saying don’t watch the Bears anymore, but saying sometimes our attachments, as you all know, bring us down.

When Jesus says it is easier for a camel to pass through the eye of a needle than one who is wealthy to enter the kingdom of God. What He’s referring to is a gate in the city of Jerusalem.

But it wasn’t really a gate. The eye of the needle, this entry way was it was a narrow slit that only one person could pass through at a time. And you could barely squeeze through. You had to kind of turn sideways and suck in your gut and get through. You couldn’t bring anything in through the eye of a needle. You could only just whatever was on your body. Basically, you had to leave everything outside of the gate.

So what would happen is at night, they would close the gates to the city of Jerusalem to protect any robbers or thieves or enemies, foreign enemies. So if you were outside of the gates of the city of Jerusalem at night, it was a very dangerous place to be. You were susceptible to attacks. You wanted to be inside the city for protection. But if you were outside at night with all of your camels and your sheep and goats and your possessions and your tent and the gates closed, you don’t get back in time you’ve got a decision to make. Are you going to stay out with all your stuff outside of the gates of the city, Jerusalem, and be open to attack? Or are you going to leave that stuff behind and go through the eye of the needle with just your being, just yourself?

Now the foolish man thinks, I can’t let this stuff go. If I leave my sheep and my goats behind, I’m going to lose everything. But then you open yourself up to attack, whereas you just got to let it go. Go through the eye of the needle with just yourself and be safe in the city of Jerusalem.

The city, Jerusalem is reference to the kingdom of God, friends. So we’re called to be in the kingdom. With Jesus in the church, in the depths of our soul. In union with God, we have to let go of our attachments.

Let God give you wisdom to say all you need is the Lord. He can give you the strength to let those attachments go. Remember, as He says, with God, all things are possible. Amen. 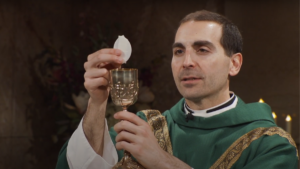 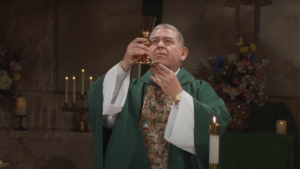 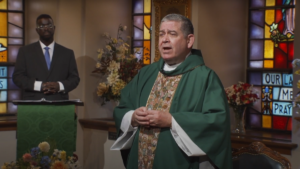