>>As those who serve. Is those who serve. That was the motto of our late Cardinal Bernardin here in the Archdiocese of Chicago. In about a month’s time, we will be celebrating the 25th anniversary of his being called home to God. Hard to believe that 25 years has passed.

Is those who serve. I had the privilege of knowing the Cardinal very well, and I can remember one fall afternoon, much like today, we went on a walk, we were by the residence just to go out for a two-mile walk. And as we approached a red light to cross over Clark street, there was an elderly woman who was standing at the corner. She, too, was waiting to cross the street.

You could tell she was nervous. She was tentative. Cardinal Bernardin, who was wearing not his collar but just lay clothing, approached the woman and said, “Ma’am, would you like me to help you cross the street?” A simple gesture.

And she looked at him and she said, “Oh, that would be nice.”

And so as they walked across the street, I walked behind and I heard the older woman, as they got to the other side, turned to the Cardinal, not knowing who he was and said to him, “You know, I don’t think your wife will be jealous at all that you walked me across the street.”

And I kind of waited and he looked at her and he said, “I don’t think she’ll be jealous at all.”

It was so cute. It was endearing, and it was a simple act of kindness.

As those who serve. You know, in John’s gospel at the last supper, there’s no mention of bread or wine being offered. The other three gospels have it. In John’s gospel, it’s the last of the gospels being written. What John focuses on is Jesus washing the feet of his disciples.

John knew that the bread and the wine, the offering of the eucharist was found in the other three gospels. And so he leaves that out purposely so that we might focus on the other part of eucharist.

The other part of eucharist is service. The washing of feet, the caring for one another to be nourished by the presence of the Lord, as we are today at this eucharist, with his body and blood and with his word, and then to go out and to serve the needs of others. As those who served. Part and parcel of what it means to be a disciple of the risen Lord. 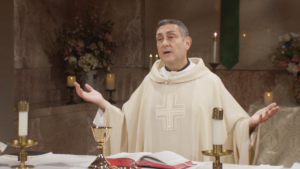 Our Lord Jesus Christ, King of the Universe 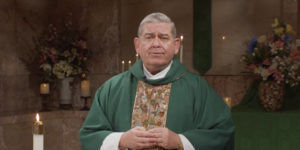 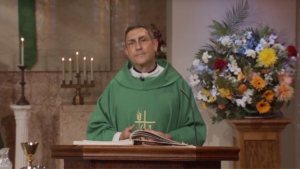