And right in the center of the city of Jerusalem is the crown jewel, it’s the temple. The Temple of Jerusalem. It’s the biggest building. It’s beautiful, it’s glittering in the sun. So, he sees this and we hear that he weeps over the city of Jerusalem because he knows it’s going to be destroyed. And he then he goes into the city and begins to preach this last sermon on how the temple is going to be torn down, all these beautiful votive offerings and stones, they’re just going to, they’re going to turn to dust. Now, this had to be shocking to the people. The Temple of Jerusalem, you see, and the city of Jerusalem also is central to the identity of of the Jewish people. I think about it, Abraham, when he’s called to be the father of Israel and he’s grounded in his fatherly role, the patriarch. He’s grounded that identity when he when he goes to sacrifice his son Isaac.

You remember the scene in Genesis? Well he, where he was going to sacrifice his son, Isaac but the angel stopped his hand is on Mount Moriah. And that’s the very same spot, Mount Moriah that’s going to be the Temple Mount, where they’re going to build the city, the Temple of Jerusalem. So historical significance, it’s where Abraham grounded him himself. And then, of course, you know, the Israelites go down to Egypt and then they’re brought out of slavery by Moses. And part of wandering through the desert is having the presence of the Lord with them in the column of cloud and fire and then the Ark of the Covenant. Well, when they finally make it through the desert and they resettle in Israel and Jerusalem, they want to maintain the presence of God and so they build this temple. This is what King David wants to do, wants to build this mighty temple, and his son Solomon’s going to do it. So, they build this temple. It gets destroyed over the centuries, but it’s always rebuilt. It’s so significant. And so, for Jesus to say, look, the central part of our faith is going to go away and it’s not going to come back. In fact, it’s not even that important was very startling. The walls are going to come down of the temple.

Why? Why is that significant? Well, we know the new temple is Jesus Christ, the new Jerusalem is his body, the church. And then in giving us each the Holy Spirit, he’s made our hearts and our souls, our lives, temples as well. When we pray in solitude with the Lord, we’re entering the temple. When we go to church and we celebrate the mass, we’re in the new temple. So, the bringing down and the destruction of the Jerusalem temple, which Jesus foretelling in our gospel is very significant because it’s ushering in this new era, I guess you could say, this new reality. And so, for us to come into the temple every time we pray and every time we worship wouldn’t have happened or wouldn’t have been possible had Jerusalem not gone through this great period of suffering. So the Romans are going to come in the year 70 or so and they’re going to destroy it. And if the Romans had destroyed the Temple of Jerusalem, Saint Peter never would have left Jerusalem and gone to Rome. And you could say the church would not have expanded outside of the confines of Palestine, Israel to the ends of the earth. So, when you go through something very difficult in your life, very, very painful – the cross, suffering, whether it’s physical or emotional or spiritual, even, you’re struggling in your faith – in a way your temple is being destroyed, but a new temple is going to be replaced and you’re going to become a new a new creation for the Lord to dwell in you. Alright? Jesus says to Malachi, “I’ve come to refine and purify the sons of Levi.” And so, we’re all purified when our temple is destroyed.

And so that’s the final thing I want to point you to, again, just the heart of Christ. He wants to take down your temple and he wants to make a new one out of you. That’s how much he loves you. So, when you’re feeling yourself with the cross being purified; God isn’t cursing you, he’s blessing you. That’s how much he loves you. You’re his temple. Amen. 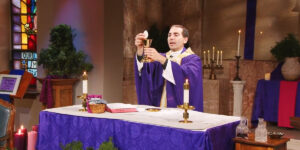 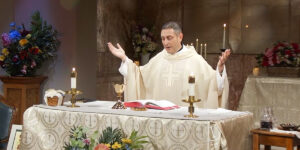 Solemnity of Jesus Christ, King of the Universe