Mercy Home’s young men recently had the opportunity to chat with a former resident and a member of our Board of Regents, Eddie Gamble, at a career panel  as part of the summer enrichment series. Eddie, along with his friend Cortez Watkins, joined the boys virtually to talk about their backgrounds, careers, and answer questions and give advice and encouragement.

Eddie has taken time to speak to our boys on many occasions since his time living at Mercy Home in the 1980s. He explained that it was important to him to give a “credibility statement” to the boys before sharing his story.

“The credibility statement I started with … is ‘I used to be you,’” he said. “’I used to sit in those seats that you’re sitting in and listen to some adult talk to me about how you can become a productive person in society.’ I started talking to them like that. What I’ve learned is you have to talk on a level that they understand … you just have to have real talk, real conversation.”

Eddie began by sharing his story, something he hopes will resonate with them and inspire the kids to stay on the right path. Eddie grew up in the Cabrini Green public housing projects and left home when he was 14 years old. He lived on the streets for two years before coming to Mercy Home. There, he explained, he received the support he needed to become successful.

There was a Christian brother on staff who acted as a mentor to Eddie. With his encouragement, Eddie raised his grades at an alternative school and was then enrolled at De La Salle High School, where he graduated with As and Bs. After graduation, he figured that he would get a job. College never even occurred to him.

“When I grew up in Cabrini Green … there was a lot of violence, drugs, gangs, all of that,” he explained. “And nobody in the history of me being alive at that time ever talked to me about going to college. The big milestone was just to graduate out of high school.”

When I grew up in Cabrini Green there was a lot of violence, drugs, gangs, all of that and nobody in the history of me being alive at that time ever talked to me about going to college.

However, Eddie was encouraged to consider college. He decided to apply to the “college up on Halsted Street,” which turned out to be the University of Illinois at Chicago. He was accepted.

Eddie graduated from UIC with a degree in criminal justice, as well joining the army two years into his time in college. He was in the army for 20 years, and, upon retiring, became an investigator at the Illinois Attorney General’s office. He retired from that job last year.

Cortez, who is Eddie’s fraternity brother, also shared some of his background. He grew up in Tennessee, went to college in Louisiana, got a degree in engineering, and moved to Illinois. He first worked at the Urban League, mentoring young people who came from similar backgrounds as Mercy Home’s kids. He runs a mentor program through his fraternity, and is now an engineer at Fermilab, a particle physics and accelerator laboratory. He hopes to host our kids for a visit after the pandemic when it is safe to do so.

The boys were also given the opportunity to ask Eddie questions about his job, background, time at Mercy Home, and even his favorite books.

Director of Post-Secondary Options Katelyn Dollard explained that this portion of the day was especially impactful on our young men.

“In the moment of the conversation, [it] just very much turned into conversation about our guys reaching their goals and, Eddie was pretty open about this, being a man of color in the city, and just trying to provide mentorship and support and connect with the guys.”

Eddie’s unique ability to connect with our young men made the day especially enjoyable. He encouraged them to embrace the rules at Mercy Home, as well as the importance of hard work.

She also added her appreciation for Eddie’s consistent willingness to support our kids and spent time with them.

“He’s always willing to yes,” she said. And [we are] super appreciative [that he is] super generous with his time. It was really fun to see some of the kids that had been at Mercy a bit [who] definitely remembered and recognized him. I think that was nice, too, seeing him come around again.”

On his end, Eddie also enjoyed the day and found it meaningful to engage with our kids.

“It was good, it was fun,” Eddie said. “I enjoyed chatting with the kids. … It’s important. It’s a part of my giving back.”

We are so thankful to Eddie and Cortez for spending part of the day with our kids encouraging and supporting them. It made an enormous impact! 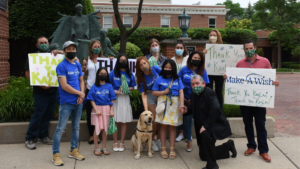 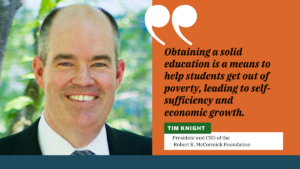 At Mercy Home for Boys & Girls, we take pride in being among today’s leaders in trauma-informed care to help... 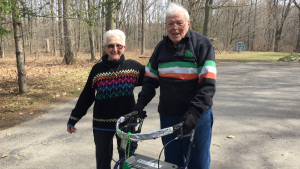 John and Kathleen Treanor have never been the type to sit still. Married for nearly 67 years, the longtime Mercy...