In the darkest of times, the Lord looks for men and women to take up the task of serving the people by bringing light to that darkness. After all, this is something Jesus did during his lifetime. In the Gospel from the Feast of Christ the King, both rulers and soldiers were mocking Jesus as he was crucified. One of the condemned criminals also mocked Jesus, asking him why, if he was the Christ, he did not save himself, along with the two criminals beside him. But the other criminal recognized both his own guilt as well as Jesus’s innocence. That man recognized the need for conversion and placed his trust in Jesus. He pled, “Jesus, remember me when you come into your kingdom.”

The Feast of Christ the King reminds us that Jesus’s decisions went against the grain of society and that everyone paid attention to the things he did. Even so, his actions were always done with humility as he humbled himself to share in the suffering of the cross. In this act, Jesus humbled himself to share in our humanity. Christ teaches us that we must die to ourselves, just as the second criminal did by acknowledging his own guilt and asking Jesus to remember him. Through the Holy Spirit, Jesus allows us to grow and asks us to change ourselves and to follow him. Despite his own personal, very human suffering on the cross, he was able to recognize the criminal’s conversion and faith in him, saying, “Amen, I say to you, today you will be with me in Paradise.”

We are instructed to live our lives based on Christ’s teachings in the Gospel. It is through these teachings and Jesus’s actions that we are encouraged to love and respect each other. And by doing so, Jesus allows us to share in his kingdom. Even with our sinfulness, Paul writes in his letter to the  Colossians that we are invited to live in Jesus’s kingdom: “He delivered us from the power of darkness and transferred to us the kingdom of his beloved son, in whom we have redemption and forgiveness of sins.”

“He delivered us from the power of darkness and transferred to us the kingdom of his beloved son, in whom we have redemption and forgiveness of sins.”

This month of November, particularly on the Feast of Christ the King, we celebrate the one who rules over us with love. Even when we hurt and suffer, we must keep in mind that Christ the King suffers with us. And by suffering and dying to ourselves, we are given a new life in Christ, who forgives us of our sins.

I know that so many are struggling right now. I encourage all of you to look at the Christ the King in your own life, especially in times of hardship. By placing your trust in him, you know that all will be well when we are finally in paradise with him. And as you place your trust in him, know that you remain in my most heartfelt prayers. 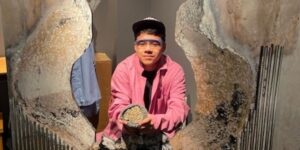 Recently, a group of Mercy Home’s young people enjoyed a unique STEM experience by touring the Argonne National Laboratory in... 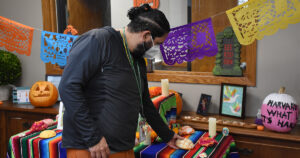 Generations of unconditional love and friendship are etched into the culture of Mercy Home. And during this year’s Día de... 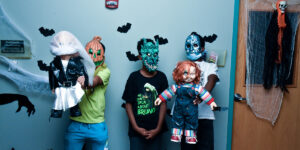 “Haunted Hallways” Makes a Hair-Raising Return  For the first time since 2019, the bravest of our young people once again...