Donate to Mercy Home now!
Home /◄ About Mercy Home /◄ Blog /◄ Down but Not Out, Champ Fights for Kids 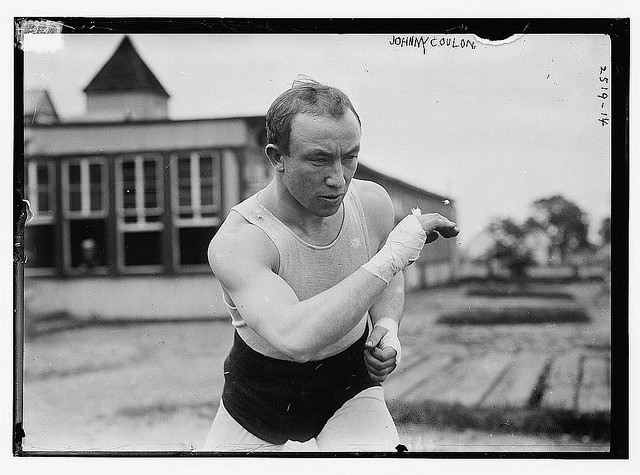 At only five feet tall and weighing 110 pounds—roughly the size of a modern American 13-year-old—former boxer Johnny Coulon used to bet men twice his size that they couldn’t lift him. All across the country, men lined up to accept this seemingly ludicrous challenge. When even the brawniest of takers would lay hands on Coulon’s small frame, he would reach toward the other man’s neck and press gently on a nerve. True to his claim, Coulon became an immovable object. It was as if his feet had fused with the earth below. Not even heavyweight champ Sonny Liston, also known as “The Big Bear” could budge the diminutive ex-champ.

But it was the bet that Coulon lost that cemented his name in Mercy Home for Boys & Girls lore.

For four years, Coulon reigned as the bantamweight king of the world after besting England’s Jim Kendrick in March 1910. In 1914, future boxing hall of famer Kid Williams began pestering the defending champ to meet him in the ring. Not having confidence in his physical preparedness at the time, Coulon refused. Williams continued to taunt Coulon, then offered him $500. Coulon was still unmoved—and still unmovable. So Williams sweetened the pot to $1,000. Finally, Coulon relented, on a condition.

“You give me $1,000 to fight you and I’ll give the money to a Chicago charity,” he responded. Canadian by birth, but raised in Chicago, Coulon selected the Working Boys Home, known today as Mercy Home for Boys & Girls.

The match was set for June 9th in Los Angeles. It is said that it’s not the size of the man in the fight, but the size of the fight in the man. Williams was an inch taller than Coulon and outweighed him by six pounds. But remembering his challenger’s taunting, and the kids back at the Working Boys Home, Coulon entered the ring with plenty of fight that day.

Sadly, even with the boys at the Mission rooting wildly for their champion, Coulon’s fighting spirit wouldn’t be enough. Williams knocked Coulon to the mat in the second round with a wild right that landed just over his left ear. It was the first time in his career that Coulon ever been down for the count.

“Coulon had been bowled off his pins before,” the Chicago Daily Tribune reported, “but always had bounded to his feet before the referee had tolled off one second.”

Mercifully, the bell sounded as the ref reached eight, sparing Coulon for the moment. But midway into the third round, Williams put Coulon down for good with a blow to the same spot. For the first time, Coulon would not rise to his feet.

The next month, Fr. C.J. Quille, president of the Working Boys Home, met Johnny Coulon at the Mission’s old oak door on Jackson Blvd. In his pocket, a $1,000 gold certificate which he handed to Fr. Quille saying that he came to deliver the promise he had made to the boys. He’d never regain his title, but for the boys at the Mission, Coulon was still their champion and a giant among heroes.

The sweet science would play a role in Mercy Home’s history for nearly 100 years after Coulon’s bout for our boys. In the 1930s, Mercy Home President Fr. Edward Kelly and Chicago Archbishop Sheil brought the Catholic Youth Organization boxing program to Mercy Home. Golden Gloves competitions were later staged in the Home’s boxing gym. The gym fell out of use for decades until the 1990s when it was resurrected for the purpose of training amateur fighters—employees of the city’s financial firms—who raise funds for this mission each year at Ringside for Mercy’s Sake. 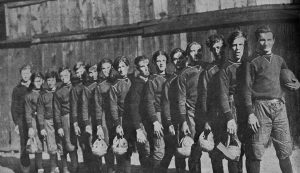 Read about the "Mission Flashes," our football team formed in the 1920's as an effort to build up our boys'...