In July 1973, then Chicago Archbishop John Cardinal Cody summoned the Rev. James J. Close to his office. The Cardinal told the 37-year old parish priest that Fr. Edward “Jake” Kelly, who had led the Mission of Our Lady of Mercy for nearly four decades, was dying and that he wanted Fr. Close to take the reins right away.

Close didn’t know much about the mission and returned the following day to inform the Cardinal that after ‘a night of prayer and reflection,’ he had decided to decline his offer. Cody replied, “I prayed and reflected on this last night, too, and you are going to the Mission of Our Lady of Mercy. Tomorrow.”

Close remained at Mercy Home for 33 years and brought about some of the biggest changes for our Home: the opening of a home for girls, now known as our Margaret Walsh Campus; the founding of our Friends First mentoring program; the founding of our AfterCare program; and the expansion of our boys campus in Chicago’s West Loop.

Upon taking the reins, Fr. Close had a big job ahead of him. In the early 1970s, many childcare institutions were closing. Mercy Home itself was close to bankruptcy. Fr. Close knew that he had to rely on God, and the friendship of the mission’s many supporters, to prepare Mercy Home for the future.

In this informational pamphlet, published by Fr. Close in 1976, you can read about our history and see some photos of life at our Home in the 1970s.

A Letter from Fr. Close

Read a letter from Fr. Close that opened the pamphlet. In it, he discusses the importance of Mercy Home’s supporters in the lives of our kids. 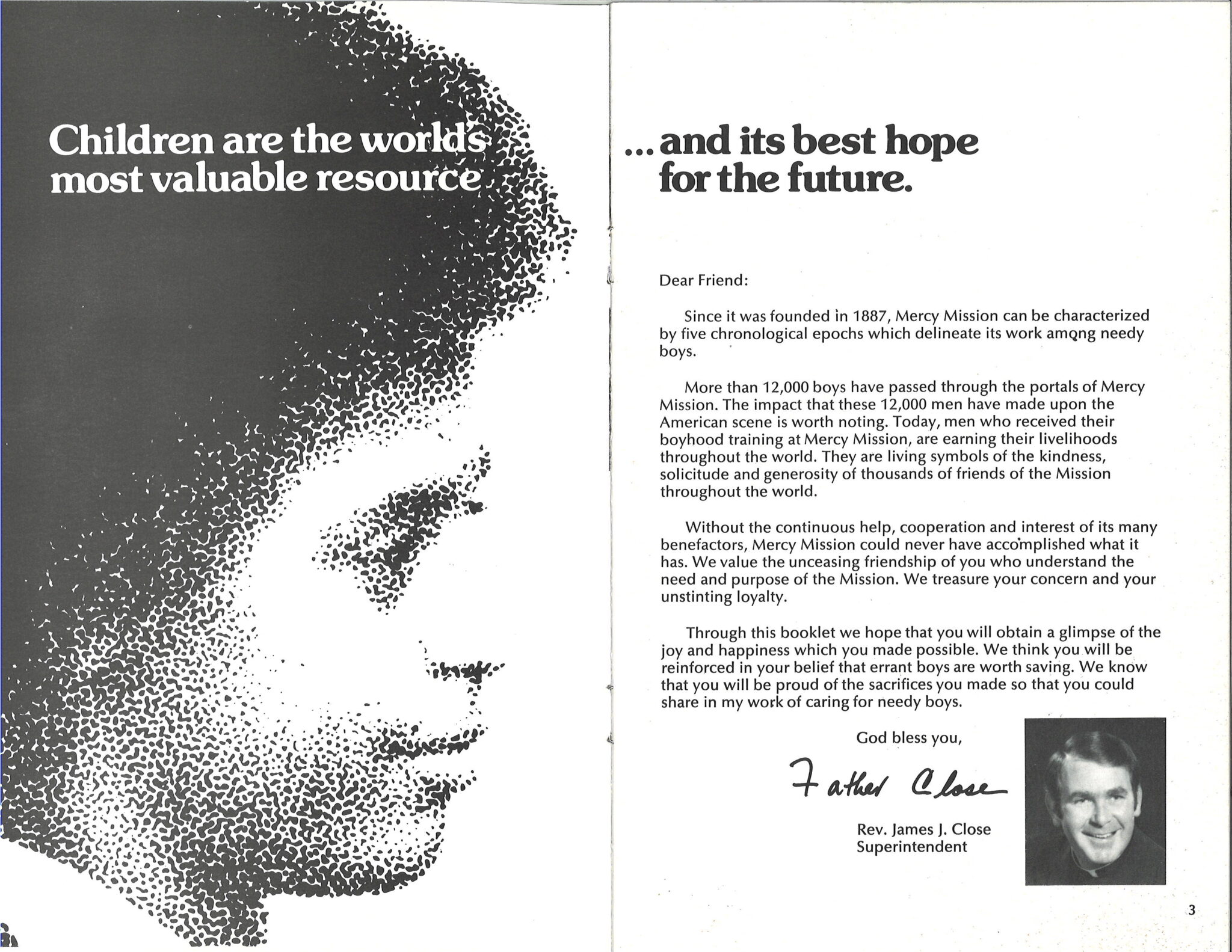 Since it was founded in 1887, Mercy Mission can be characterized by five chronological epochs which delineate its work among needy boys.

More than 12,000 boys have passed through the portals of Mercy Mission. The impact that these 12,000 men have made upon the American scene is worth noting. Today, men who received their boyhood training at Mercy Mission are earning their livelihoods throughout the world. They are living symbols of the kindness, solicitude, and generosity of thousands of friends of the Mission throughout the world.

Without the continuous help, cooperation, and interest of its many benefactors, Mercy Mission could never have accomplished what it has. We value the unceasing friendship of you who understand the need and purpose of the Mission. We treasure your concern and your unstinting loyalty.

Through this booklet, we hope that you will obtain a glimpse of the joy and happiness which you made possible. We think you will be reinforced in your belief that errant boys are worth saving. We know that you will be proud of the sacrifices you made so that you could share in my work of caring for needy boys.

Browse the rest of the pamphlet for historical stories and photos from around the home in the 1970s.