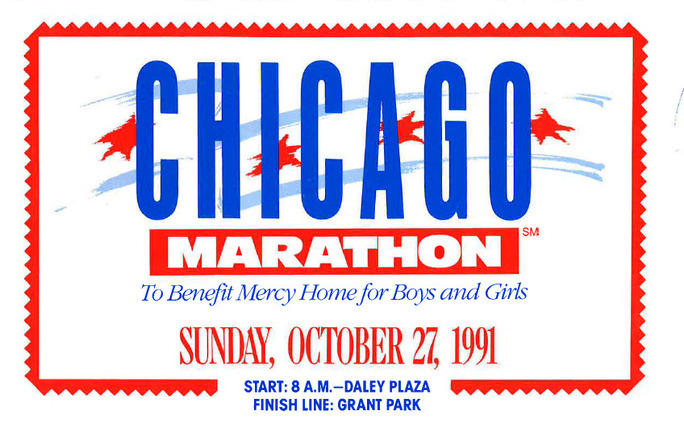 While Mercy Home for Boys & Girls celebrates its 130th anniversary, we look back on a partnership with another great Chicago institution that’s also marking a special milestone this year. Known today as the Bank of America Chicago Marathon, the event is celebrating its 40th anniversary.

In 1991, in just its 14th year, the Chicago Marathon launched a new charity program that exclusively benefitted Mercy Home. The Marathon Update newsletter of October 1991 described this charitable focus:

“Officially dubbed ‘The Chicago Marathon to Benefit Mercy Home for Boys & Girls,’ this year’s race is dedicated to helping Chicago’s modern day orphanage continue its mission of rescuing children from the perils of broken homes and city streets.”

Celebrities Join the Cause

Leading sports celebrities even brought some extra muscle to the fundraising effort that year. Late Olympian Florence Griffith Joyner headlined a special 5K charity challenge in conjunction with marathon weekend’s 5K race to raise even more support for our young people. Runners participating in the 5K race on marathon day made a minimum donation of $10 for the chance to beat the official “challenge time” set by the world’s fastest woman 11 days earlier at a 5K race held at the University of Chicago. Mercy Home’s young people were on hand to cheer Joyner on as she set the 5K challenge time.

In another marathon pamphlet we found in our archives, two famous local baseball players urged fans to support Mercy Home through the marathon. Robin Ventura, then third baseman for the Chicago White Sox, who later coached the team for four seasons, wrote “self-respect, honesty, hard work, and self-reliance are among the values Mercy Home for Boys & Girls teaches its residents. Please join me in supporting the kids!”

Cubs catcher Joe Girardi, who would go on to coach the New York Yankees to the team’s 27th World Series title in 2009, wrote, “Against a backdrop of hurt, abuse, and neglect, these kids are working hard to build self-esteem and become successful, caring adults.” 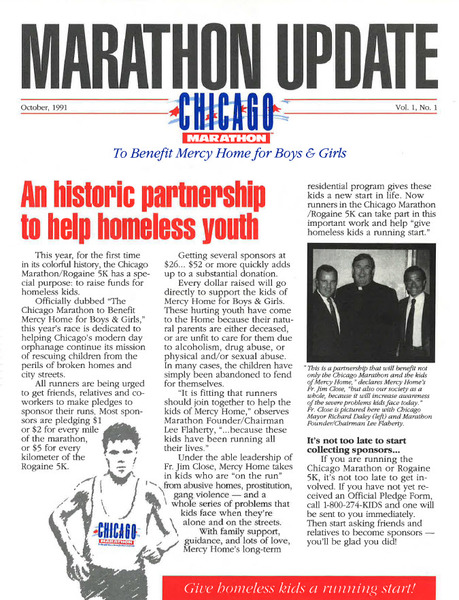 Mercy Home would continue this special charitable partnership with the event for several years during the decade. Since then, the marathon’s charity program and its impact has expanded dramatically.  Today, runners raise millions of dollars through the event on behalf of more than 170 causes.

Mercy Home has fielded a team of runners every year since 2010 that raises donations in support of our work with children in crisis. This October, 224 Heroes will take to the streets of Chicago once again, running past our Home on West Jackson Boulevard at Mile 16, aka, “The Mercy Mile.” We hope you will join us to cheer on our Heroes as they go the distance to help our kids.