Aniyah doesn’t remember much about the car accident. A bright flash of light, the loud crunch of metal colliding, and the screams. There were so many screams. And Aniyah was one of the people screaming.

Even though she was unhurt, safely buckled in in the back of the car, her parents didn’t fare so well. Her father was taken away in an ambulance with serious injuries. And her mother didn’t even make it to the hospital–she died on the scene.

Though Aniyah’s memories of the accident are sparse, the aftermath was far-reaching and devastating.

While her father was recovering the hospital, Aniyah stayed with her aunt, who broke the news of her mother’s death to her.

“I cried that it wasn’t true over and over,” Aniyah said. “It just didn’t feel possible.”

And things became more surreal when she visited her father in the hospital for the first time.

“My father was covered with tubes and wires and bandages,” Aniyah remembered.

I was afraid of him. He didn’t even look like my dad anymore.

It is difficult for Aniyah to even think about the days following the accident. It felt like she had fallen into some nightmare that she couldn’t wake up from. She cried herself to sleep every night for a month, praying that her mom would come back.

After several months, her father was finally released from the hospital. They were able to hold a memorial service for her mother, which only underlined the fact that Aniyah’s mother was really gone. She thought having her father back home would help life feel normal again, but the knowledge that things would never be the same was an inescapable reality.

The father that came home from the hospital was not the same father Aniyah remembered from before the accident. He was grief-stricken and heavily reliant on the prescription pain medicines given to him at the hospital.

Over time, it became clear that Aniyah’s father’s need for the prescription medication went beyond healing from his injuries from the accident. His moods were unpredictable, and he showed very little interest in Aniyah.

“My dad didn’t even seem like the same person anymore,” Aniyah said.

He was angry and depressed, and he slept a lot of the time. I felt really alone.

To make matters worse, there were mounting financial pressures from the accident. Aniyah’s parents both worked before the accident, but the loss of her mother’s salary and her father’s missed months of work put a strain on the family’s finances, especially when the medical bills began arriving.

With Aniyah’s father’s prescription addiction only getting worse and the unpaid bills mounting, someone had to step up. And there was nobody to do it but Aniyah.

There was never much food in the house, but she did her best to make meals for both her and her father, even though it was often simple things like cereal or peanut butter sandwiches. She was hungry all the time, and it made it hard to focus in school. And Aniyah’s dad didn’t ever think to buy Aniyah new clothes as she grew, so she had to go to school in clothing that was old, too small, and sometimes dirty. She was embarrassed but afraid to even bring up the subject to her dad.

She learned her lesson about doing that when she asked about the stack of bills with scary looking “Final Notice” warning stamped all over them in red ink. Her dad blew up at her and called her ungrateful. Since then, she knew that she asking her dad questions was a bad idea.

It was hard to sleep. Aniyah often thought about how much her life had changed. Before the accident, her home was a loving place. Her parents were attentive to her needs and Aniyah never had to worry about anything. Now all she did was worry.

“I would cry most nights because I missed my mom,” Aniyah said.

And really, I missed my dad, too. The dad I knew before the accident was gone, too.

The stress of the situation was weighing heavily on Aniyah. Her grades, which had once been solid, were beginning to drop. Her teacher was beginning to take notice of the way things seemed to be deteriorating in Aniyah’s life and asked Aniyah if there was anything she wanted to talk about.

“I didn’t really know what to say to her at first,” she said. “I started by explaining that my mom died and it seemed to hit my dad really hard. Then everything just came out.”

The next day, Aniyah’s guidance counselor called her into his office. He explained that he heard about what was going on at home and knew about a place that could help: Mercy Home.

There was nothing Aniyah wanted more than to have someone take some of the burdens resting on her shoulders. But she was also concerned about her father.

“Mercy Home sounded like a solution to so many problems,” Aniyah said. “But I worried about who would take care of my dad if I wasn’t there.”

Her counselor explained that in addition to providing Aniyah with everything she needed, like a safe place to live, three warm meals a day, plus therapeutic and educational support, they could also provide her dad with resources to help him. With that reassurance, Aniyah was ready to move in.

Aniyah didn’t realize it at the time, but when she and her father were meeting with our Admissions coworkers it became clear that her dad was suffering from an addiction to the prescription medicine from his accident.

“When I realized that was what was going on, in a way I was relieved because it explained the way he had been acting,” Aniyah said. “But it also made me realize how bad things had gotten.”

I was angry that this stopped him from taking care of me.

Mercy Home was able to connect Aniyah’s father with a program that would help him get clean. And with her father taken care of, Aniyah was able to focus on herself for the first time in a long time.

With a regular routine and everything she needed, Aniyah began to thrive. She loved the predictability of the routine of each day, with time for meals, to study, to do chores, and to relax. With some help from her tutor, her grades began to rise again.

But the biggest change was the time Aniyah spent in therapy. With her therapist, she was able to discuss her grief over the loss of her mom and the difficulties she’d experienced since the accident. She and her dad also participated in family therapy together, and are both working hard to heal their loving relationship.

“Before coming to Mercy Home, I was worried I would never have a relationship with my dad again,” Aniyah said. “But he’s working hard to change, and things have improved between us.”

Aniyah used to carry the weight of the world on her shoulders. But now she knows that she has a network of support behind her: Mercy Home’s coworkers, her tutors, her peers, and loving friends like you.

Thank you for helping change the ending of Aniyah’s story. Your kindness to our kids is so essential to their success. 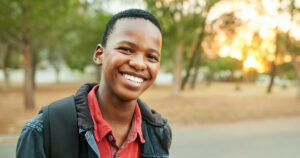 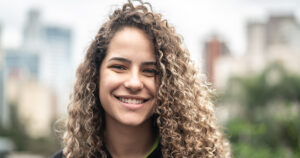 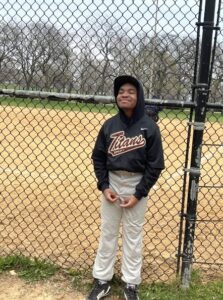