Reflections from the Rita Clubs

Mercy Home’s girls campus opened in 1987 and has been providing support for young women in need ever since. But Mercy Home’s tradition of serving young women actually began long before that, through our Rita Clubs.

Rita Clubs were homes opened throughout the city of Chicago for working young women. These homes were meant to assist women who were living in the city “without the protection of home or guidance and direction of relatives or friends,” according to a 1920s issue of The Waifs Messenger, Mercy Home’s donor magazine. Residents paid a nominal fee to live in the Rita Clubs based on their earnings.

The first Rita Club opened in 1921, and two more opened shortly after. While much was written about the Rita Clubs in The Waifs Messenger in the 1920s and 1930s, information about the clubs in the decades that followed is difficult to find.

Fortunately, we recently had a visit from two residents of the Rita Clubs in the 1960s who were able to give us more information about what life was like in these homes.

Sisters Patricia Kennedy and Diane Sunden both lived in the Rita Clubs during their final years of operation. Patricia moved into the Rita Club in September of 1966 and left shortly before Diane moved in during June of 1967.

“It was a safe place,” Diane said. “It was a great bridge between leaving the family home and being able to live on your own and have your apartment and pay all the bills. It was a place in between. You could start to spread your wings, enjoy some independence.”

Both Patricia and Diane shared written reflections of their time in the Rita Clubs with us, and we have included excerpts of these reflections below.

“In June 1967, along with my best friend Linda, I moved into the Rita Club. … I was 18 years old, and Linda was a month shy of her 18th birthday. We were newly graduated from an Indiana Catholic high school.

The Rita Club was located in the heart of Chicago’s Old Town. … The place had something like 40 or 50 single rooms, spread out among four floors … in what was a sturdy stone and brick building, circa pre-World War I, interconnected to other buildings on the block. Rent was $7 a week. … The atmosphere of the Rita Club was sedate and orderly, similar to a convent.

In 1967, Miss Mary A. Cogley was Directress of the North Avenue Rita Club. Though I didn’t know it at the time, she was 89 years old and close to marking 40 years in the role of Directress. Though she relied on some assistance from a cane, I saw nothing about her that told me she wasn’t up to handling her job.

Though we live in different states and haven’t seen each other in close to five decades, I am still in phone contact with my good friend Linda. We love to talk about our shared memories, including the ones formed when we lived at the Rita Club.

I was surprised and happy to recently find Miss Cogley’s published obituary, especially as I always wanted to learn more about this remarkable woman. It turns out she did not outlive the Rita Club for very long, as if her life’s purpose had been completed once it closed.”

“It was 1966, the year that I graduated from Central Catholic High School in Lafayette, Ind., and the year that I moved into the Rita Club. I was anxious to move back to Chicago, find employment, and live life on my own.

I was 18 years old and managed to talk my Lafayette friend Elizabeth (Gay) into moving to Chicago with me. She had never lived in a big city. We used to go to dances in Lafayette just about every weekend where live bands would perform. … We were both 18 and ready for adventure.

The Rita Club was located just a few steps away from the corner on North Avenue and Wells Street where Norwell’s drug store once stood. … [The neighborhood] had a lot to offer. It was alive and vibrant with all sorts of activities and places to go. It was also at this time a bedrock of the counter culture movement, the love and peace movement, and ‘the hippies.’

Miss Cogley, the proprietress of the Rita Club, had managed it for several years before Gay and I arrived. … I could tell she was religious, and very professional looking in her appearance. She was in her late 80s at the time. She had also run another Rita Club on the West Side of Chicago for about 23 years before coming to the North Avenue site. She seemed very proud of the place and took her responsibilities seriously.

Gay and I were able to find employment within a week after we moved into the Rita Club at the Chicago Tribune in the Advertisement Verification Department. We took a bus to work just about every morning.I learned a lot during my stay at the Rita Club. My room there was like a sanctuary from the world and the streets, a safe haven. I eventually learned to manage my money better. I learned the value of hard work which gave structure to my life as well as the value of a good education. I also learned to be more careful about the choices I made in life and who I call my friends. Above all, I learned to appreciate and value my mother’s prayers.” 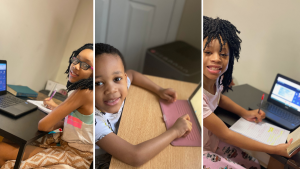 The NBA and AT&T team up to help Mercy Home's kids and families stay connected to their education while navigating... 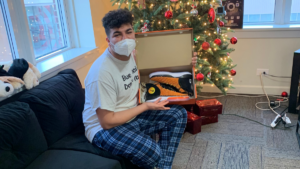 A generous donation of new shoes from SwishHouse and 360 Soles brightened both the holidays and wardrobes of Mercy Home's... 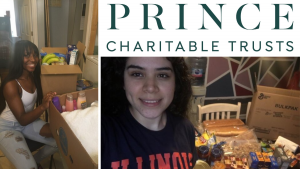 Prince Charitable Trusts has supported our young people’s well-being over the years and went above and beyond with additional support...